I am a TV person.  I can't stand it if my cable goes out.  No TV is just torture for me.  When I moved two years ago I didn't have cable for a couple of days and I played DVDs over and over again.  I had Friends and I don't care how many times I have seen an episode I can watch it over and over again and laugh like I haven't seen it before.

I am thankful for TV in general, but especially DVR and On Demand.  I sleep with my TV on.  I have since I was little.  When I would go spend the night with friends and they were one of those no light no sound people, I stared at the ceiling all night and heard EVERY SINGLE sound.

My kids just can't imagine that we only had a few channels when I was growing up.  There was no cartoon network.  You binge watched on Saturday mornings because you couldn't get them again until the next Saturday.  It is just crazy how many channels there are now.

We have all of these channels, but it seems like there are two nights a week all my favorite shows come on and then there are a night or two where I don't really like much on.  This is where DVR is magical.  It is great enough to be able to record more than one show at a time.  When we had to tape everything before DVDs you could only tape one thing and you couldn't watch another channel on that television.  On Demand is even better because if you forget, you might be able to find your show on there.  I love all of The Real Housewives shows.  I didn't think it was On Demand then one day I found it under another subject and it was like hitting the lottery!

I do abuse DVR, though.  Because I have it and I am not too picky when it comes to TV, I think I have to record everything.  I am constantly at 99% full and have to figure out what to erase.

Me and my daughter, Sydney, like all of the paranormal shows.  I record those because we watch those, then something funny after it before we go to sleep!  A couple of our favorites paranormals are Dead Files and Paranormal Lockdown.  We like American Horror Story, but I would be afraid to meet the writers of that show.  I couldn't watch a couple of seasons.  It's just disturbing.

Other favorites are both Teen Moms.  We get so mad watching it, though!  We mostly get mad at the dads, but a couple of those girls are a little cray cray! Our new favorite is Siesta Key.  Pretty people, the beach, and drama.  The TV show trifecta!

I am always so ready for this time of year for new seasons to start.  Although with so many new channels and Netflix, there is always something new on!

Our little girls, our two dogs Mia and Maggie, even love watching TV with us!  They sit on my bed and watch whatever me and Sydney are watching.  These are a couple of pictures we took recently. 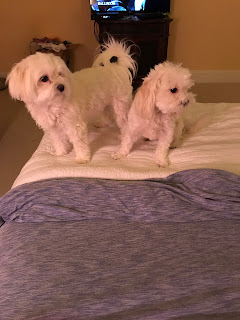 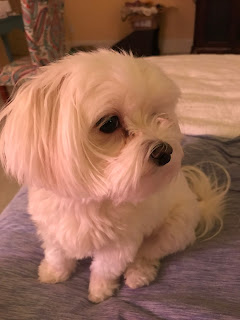 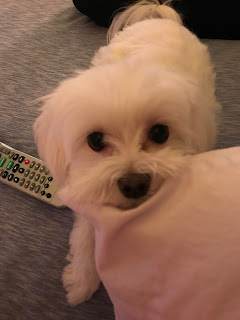 Mia can get on the bed, I have an ottoman she uses, but Maggie has a bad knee and has to be put on and off the bed.  This is Mia with the remote.  She's funny!  I will walk back to my bedroom sometimes and she beats me back there and is on the bed near the remote and it's so funny.  She looks like she is watching TV and in charge of the remote! It's really funny when she's on the couch in the den, on the blanket we keep on the couch and the remote nearby. Maybe she knows what she's watching! It would be really funny if I walked in one day and the TV would be on Animal Planet.

I love watching Andy Griffith.  It's like comfort food.  I remember watching it at night when I was in elementary school.  It would come on and so would The Carol Burnett Show.  We had a dining room table, but at night when they were on, we would eat dinner off of TV trays in the den and watch them.  I love the show anyway, but those memories make watching it now just comforting.

I have heard some city people say they can't sleep if they are away from the sounds of the city.  It makes sense to me!  If my TV turns off for some reason during the night, I wake up. If I am recording one of our paranormal shows and I wake up while it's recording I have to turn the channel.

That's the beauty of DVR, I can change the channel and keep recording!  What are your favorite things to watch and do you sleep in quiet or with noise?

Oh, and I keep the bathroom light on.  ESPECIALLY if we have watched American Horror Story!