Don't you just love when others tell stories about you when you were little?  We have the blessing of not remembering it, only to have others tell their version.  Evidently, I was as my dad says, "a little pistol" when I was little and if I am honest, not a lot has changed.

I have always referred to my personality as independent and strong willed, but I think some, especially my parents, might call it stubborn and hard headed.  They say you pay for your raising and I have one child just like me.  I won't say who he is.  ("He" gets my daughter off the hook.)  He knows who he is.  Or, maybe not.

I have never liked authority or being told what to do.  I have no problem with rules in general and I get really frustrated when others don't follow just basic manners, but someone TELLING me what to do has always ticked me off and made me want to do the opposite.

My grandmother, Betty, had two favorite stories of me growing up.  One was me oinking at a policeman who pulled over my grandmother with me, my mom, and two aunts in the car.  I do feel bad about that one but I was only 2.

The other was when we went to see Santa Claus when I was 2.  (Almost 3.  My birthday is in February.  I have only met one other April who wasn't born in April. Maybe my name started me off defying what is expected.)

Anyway, I am the oldest grandchild on both sides so this was a big deal to have me go sit in Santa's lap.  Only I didn't want to. I did it to my own kids, but it really is a crazy thing.  We are taught when we are little and then teach our own kids not to talk to strangers and nowadays there is even more kinds of stranger danger we warn little kids about.  THEN, we take them and tell them to talk to a stranger who sneaks into our houses during the night.  He's bringing toys, but we tell them not to accept candy from strangers.  No wonder so many kids go nuts when they are forced to sit in his lap.

I didn't like it and was mad that I was made to sit in his lap.  He kind of holds you still for the picture which probably reminded me of being held down at the pediatrician which I have been told I didn't like either.  Anyway, you can tell from the picture I am good and mad! I have him by the beard and finger. After the picture I walked away, turned back around, and called him a "Dummy Asst."  I don't know where I heard it from, but thought there was a "t" at the end of ass. 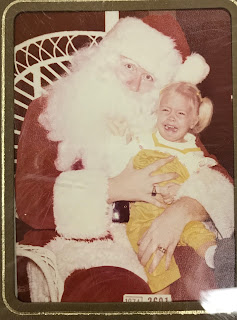 That attitude has followed me my whole life and my stubborness and mouth have gotten me into trouble at times, but I am thankful I have never been afraid to stand up for myself or others.  I just don't always use good sense with the specific people I get mad at!

This picture is a little later when I learned to contain myself a little better. 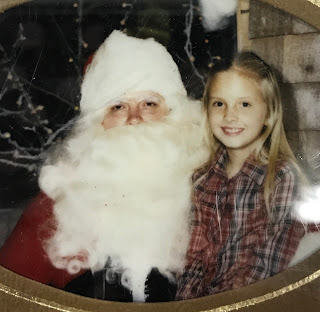 In the spirit of being individual and not always going with the norm, I made these big hoop earrings.  They are stainless steel hoops and have sari silk tied with stainless steel chain and Czech glass beads. 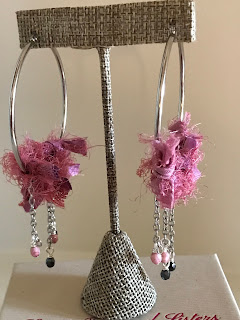 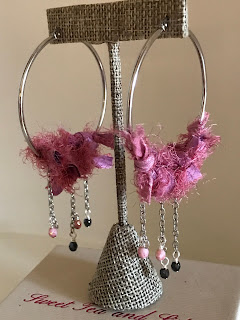 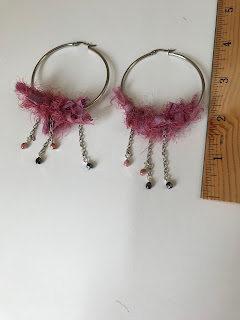 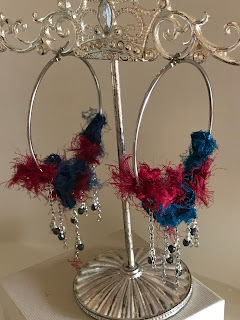 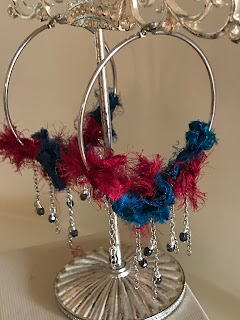 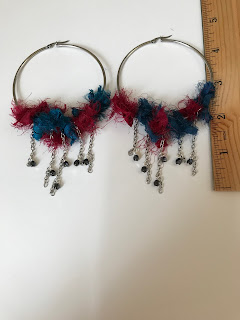