It Is Well, With My Soul

I started this blog to express the inspiration behind my designs and the name of my business.

Most of my jewelry is inspired by my strong faith.  My raising and my family have given me such a strong relationship with God.  The name Sweet Tea and Sisters is because I am from the south, (and we know how much southerners love sweet tea!) and I have very strong women on both sides of my family. I have memories from both sides of my family of women sitting around a table after family dinners and drinking tea and just talking. We did this at great grandmothers homes and both of my grandmothers and now at my moms. I am blessed to have grown up with the message instilled in me that I could do anything.  Being a girl never stopped me from thinking I could do whatever I wanted.

Most of my designs have Karen Hill Tribe beads.  I think the way these beads are made and the history and tradition for generations are clearly seen in everything they make.  They are beautiful, but knowing the story behind them makes them even more special to me.

I wanted to make my custom charms with my artwork.  I love traditional church hymns and they have so many memories of church when I was growing up.

I had different ideas about the designs, but when I started, they just kind of came about and I love the way they turned out.  I have more with other traditional songs coming in.  I want these to be a collection that can be worn together.

The first design I did was "Amazing Grace" followed by "It Is Well With My Soul."  I love the song "It Is Well" and the meaning behind it.  I however didn't know about the inspiration behind the song.

It was written by Horatio G. Spafford and the story behind it is one of the most meaningful testimonies you can hear about.  He has been compared to Job because of the things that happened to him and his wife, Anna.

He was a successful lawyer and businessman in Chicago.  He and his wife had 5 children.  The had one son who died of pneumonia in 1871, and the Chicago fire happened the same year and he lost most of his business.  His business did recover and he began to be successful again.

In 1873, he and his wife and 4 daughters were going on a trip to Europe.  He found it necessary to send them on and he was to take care of an unexpected business problem and follow them there later.  The ship his wife and daughters traveled on was the French ocean liner, Ville du Havre.  There were 313 passengers on board.  After four days of crossing the Atlantic, it collided with an iron-hulled Scottish ship.  Anna went to the deck with her four girls and they prayed to be spared if it was God's will, but if not make them able to endure the worst that might happen.  Shortly after, the ship sank carrying all passengers with it.

Anna was found floating on a piece of wreckage and taken to Cardiff, Wales.  From there, she wired her husband to tell him of the tragic loss of their four daughters. Spafford left on the next available ship to get to his grieving wife.  About four days crossing the Atlantic, the captain called Spafford to his cabin and told him they were over the place where the ship along with his daughters went down.

"It Is Well With My Soul" was written on that journey.  Spafford and Anna went on to have three more children.  One of those also died at the age of four from pneumonia.  In 1881, the family moved to Jerusalem and that is where he is buried.

Knowing the story behind the song just makes it even more meaningful.


I have added this bracelet to my Facebook shop.  I will be adding more like it.  The chain is Stainless Steel as well as the lobster clasp.  The clasp can hook onto any part of the chain so it will fit just right.  I have a pretty little Karen Hill Tribe flower bead  hanging on the end so as the chain hangs the bead with be on the end. 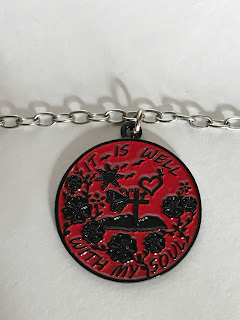 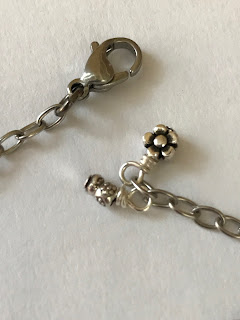 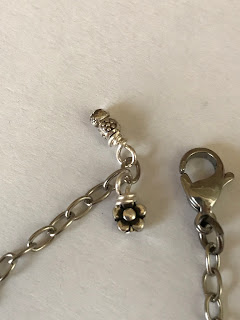 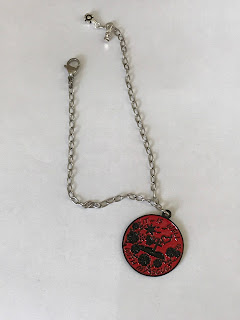 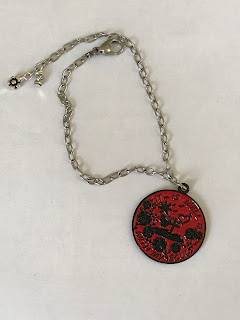 ***Update:  I am adding more bracelets to my Facebook shop.  I added a bead to the new ones and think it really looks pretty so I have added it to the red posted here. I updated the picture to show the change, but there is no change in the price of the listing.  I just thought it looked prettier!

I am really excited about this charm, my Amazing Grace, and the others that will be in soon.  I want a collection of traditional hymns with fun artwork that is significant sybmbols to the song on the charm.  I can't wait to show you my next song!  Traditional hymns have so much meaning behind them and the charms are a fun reminder of those messages.

The words to the song, "It is Well With My Soul" are: