I am a little embarrassed to say it, but I love reality television.  I have my favorites.  I love all of the Real Housewives.  Teen Mom is probably my favorite.

This world is so crazy and sometimes it is just nice to watch something and not have to think too hard.  I am not sure how much of reality TV is real, I would bet a lot of script and editing takes place, but it is still fun to watch.

The Real Housewives are just entertaining.  The Beverly Hill's wives are fun to watch to see what they are wearing, where they live, and what they drive.  Their drama is just women fussing at each other and talking about each other behind their backs. I do like the new addition of Teddi, John Mellencamp's daughter.  She is fun, but seems a lot more level headed.  Now, the New Jersey wives don't play.  They are probably my favorite because you don't mess with those ladies.  Tables get tossed, cakes get thrown, and they don't hold back telling how they really feel.  I also enjoy the OC wives because they are the original cast.  I was in a restaurant one time and Vicki Gunvalson walked by my table and before I even thought I said, "Vicki!" She turned around and looked really disappointed when she saw me.  She was probably expecting someone she knew the way I said her name.  The New York wives are fun because they are always drunk and falling.  It's hard to cause too much drama when you can't remember why you were fighting!

Teen Mom is my favorite because it seems more real.  I think Caitlyn and Tyler are the sweetest couple and I don't know how anyone who watches can't just root for those two to make it.  I think they will.  They have gone through more than most adults. Maci is so down to earth.  I catch myself yelling at some of the dads, though on Teen Mom and Teen Mom 2.  I know they are young, but some of them need to get their crap together or stay away until they do.  I know I am sensitive on the subject, but I doubt I am the only one who gets frustrated with them.

I have said so many times I love television and these shows are just easy to watch.  You can follow them on social media in real life, so it's kind of like the show doesn't end.  Sometimes you learn things before they film and are on the show.

And, I still watch The Bachelor, but have lost faith in it.  They don't even keep the drama girls on until the end anymore.  It used to be that if one in the house was crazy, they were sure to make it to the end.  If any of the other girls or guys talked to the bachelor or bachelorette about them, the tattletail would leave before the cray cray one.  Bachelor In Paradise is better than the regular series.  They drink all day and have nothing else to do.  What could go wrong??!!!

I think I like the tropical scene of Bachelor In Paradise.  I am thankful for reality television, but I am also thankful it is March 1st.  We are getting a little closer to Spring, and we are closer to the time change.  I love it when it gets dark later.  In the Winter, I feel like I need to go to bed at 7:00 pm.  Plus, when the time changes again, I will get back my favorite place to make pictures of my jewelry.  I have a window that lets in the best light at around 5:00 every late afternoon.  I am excited to get that pretty light back.

Another thing I am thankful for today is my youngest nephew.  He is the baby of the family and turns 7 today.  I watched all five of my sister's babies come into the world.  I thought I was going to miss him,  I almost didn't go.  The hospital is about 45 minutes away and my kids had things going on so I almost didn't go.  I decided at the last minute to drive down and we made it just in time.  I always say he waited on me.

Our little lamb was an unexpected gift for my sister and her husband.  Their fourth was not quite a year old when she found out she was expecting him and they were definitely not trying for a fifth.  He is such a sweet, fun little boy.  Like some of the women on my favorite shows, he doesn't put up with stuff.  I guess being the fifth, he has learned to speak up for himself but he has the best personality and will definitely call you out on something if he thinks he needs to!

I made these earrings in honor of his birthday and the March birthstone of Aquamarine.  It is such a pretty stone and has a classy, expensive look.  It is definitely something I would see the housewives wear whatever zip code they may be in! 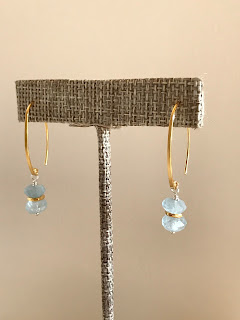 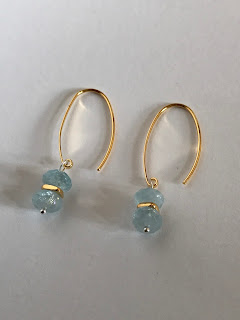 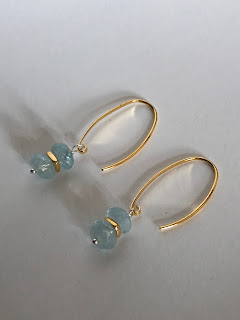 For my love of Teen Mom, I have this stretchy bracelet with baby blue and baby pink acai beads and Karen Hill Tribe cross charm and beads. 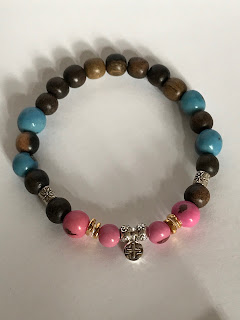 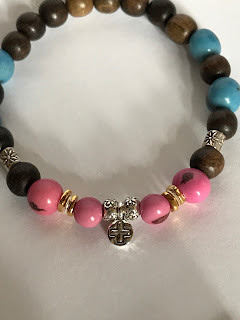