I am late posting this, but I had to get it in.  I am thankful for many things everyday.

This Thursday, I am thankful for aunts and uncles.  I have posted about how blessed I am to have 3 nieces and 5 nephews.  I am proud to be an aunt, and I am just as proud of my aunt and uncles.

My mom has a younger brother, Jimmy, and my dad has an older brother, Eddy, and younger sister, Gina.  I am his sister's clone.  She has two grown sons, but she couldn't have had a daughter more like her.  I am very thankful my mom's brother has moved back home to our town.  He moved when I was little and has lived in different places my whole life and I am so glad to have him home. 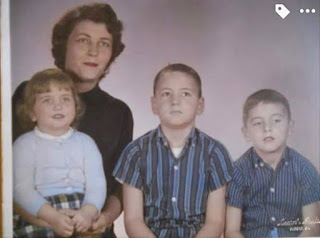 This is a picture of my grandmother, my aunt Gina, uncle Eddy, and Dad Tim.  One of my favorite pictures because I can see my kids and nieces and nephews in all of them.

This Thankful Thursday is my uncle Eddy's birthday.  He is the sweetest man.  If you look up the word meek in the dictionary, his picture should be there.  Everyone who knows him loves him.  He's just a good person.  I just got off the phone with him.  He has been in the hospital for awhile and isn't doing very good.  It absolutely breaks my heart in two.  I am very close to him and pretty sure my artistic side comes from him.  He had a leather store when I was little and he has made my kids purses, belts, and Bible covers.  He can draw anything.  I always tell him he missed his calling to be an architect because he has also built homes.

Every family has a "crazy" uncle and it seems like they are always named Eddie.  At least in the movies!  (He spells his a little differently.)  We have called him that, but we really mean fun.  He is the one always making jokes, always seeing the bright side and the good in others.  He has always said about me and my sister, "I love my nieces to pieces."  He has never missed a moment to tell me he loved me or is proud of me.

It's funny because he is my dad's older brother, but his second wife was just 5 years older than me.  He has a son who is 2 years younger than me.  He and his second wife got married and had my cousin, Sarah, then I had my daughter, Sydney, then they had my cousin, Taylor, then I had my boys, Shane and Stratton.  I always joked that growing up I couldn't have ever imagined having children the same time as him and his wife and me sharing maternity clothes but we did.  And it was so much fun.

As sweet as he is, he is tough.  He is a survivor of kidney and throat cancer.  He beat advanced throat cancer a few years ago, but the radiation is what has caused his problems today.  They don't tell you the long term effects.  I am not used to seeing him so thin and his voice so weak.  He is always the life of the party and you would know his voice in a crowd.  It also breaks my heart to see my dad so worried about him.

He had to have something done yesterday and I haven't been able to talk to him until just a little bit ago. You never know, and considering what he is going through, I made sure I said some things to him I wanted him to know.  I have never needed him that he wasn't there. It was sad, but thankfully, we have always had a relationship where we made sure to say things to each other.

I hope and pray he gets better and next year we can celebrate his birthday in a much better way!