DAD
I KNOW YOU HAVE
LOVED ME AS LONG AS
I HAVE LIVED; BUT
I HAVE LOVE YOU
MY WHOLE LIFE!


The only thing that bothers me about this post's title is I am a mama's girl too.  It doesn't mean I love my mom less because I will admit to being a daddy's girl, but she knows from having her own mom and dad there is something between a girl and her dad.  I see it with her and my grandfather.

The fact that my sweet, beautiful girl doesn't have that breaks my heart, but I always tell my kids that God knew their dad was going to turn out to be a real shit and He sure put a lot of great men in their lives.

My dad has gotten a little cheated out of just being a grandfather to my kids because he has had to step in as dad also.  He doesn't mind, though.  He's ready to be there for them however they need him.  He used to joke, was it Chevy Chase that did the "You can call me this or that, just as long as you call me,"  It sounds like it should be a part of a country song, but Chevy Chase sticks out in my mind for some reason. He was in the Simon video "Call Me Al" so maybe it was.  I don't know.  He's just happy when they call him!

What I was trying to get to is today is my dad's birthday!  He is the best man I know and the toughest.  He has battled Hodgkins Lymphoma twice and was still cancer free at his dr. appointment this summer.  He gets nervous if he gets tired or feels bad.  We will always live in a constant shadow of it coming back or striking another family member in it's many awful, terrible, disgusting forms. Both of his parents died from cancer so it is not something we are used to defeating or take lightly that he is in remission.

My parents were 16 and 17 when they got married and had me.  A lot of couples married young where I am from, but that is very young. I don't think one would now what to do without the other.

I had my female surgery in June and it was just me, my dad, and my doctor in the room before I went back.  My mom and daughter had just stepped out for a second.  He told the doctor, "I have 3 kids and 11 grandkids. She's been with me the longest, take care of her."  I am in tears now thinking and writing about it, but it was also such a sweet way of not calling me the oldest!

I won't ever forget when my sister had her first child.  I was with her having all five.  My back issues had already started and it was really hurting.  My sister was in labor, having a contraction, and she looked over and my dad was rubbing my back. In all fairness, she has a sweet husband who adores her and I don't, but she looked over with a look my great grandmother was known for that was a warning to run and she just said, "Really?!!"

My dad and I have our things.  My sister and my mom have theirs.  They love to shop.  I don't enjoy shopping at all.

I want to wish my Dad a Happy Birthday!  He's a good man, but every bit of stinker that comes out of my younger son comes from my dad.  He was always the one teasing his brother and sister.  He tells us about when my aunt was younger she would be playing blocks and just when she got them right he would run by and knock them down.  Well, after a few times of this she decided to get him back.  He ran through the room and she slapped her hands then yelled for my grandmother, "Tim hit me!"  He got in way more trouble for not doing that than he would have for knocking down the blocks!

He's funny.  That's just one reason why all of his grandchildren absolutely love and adore him.  My youngest niece calls herself "Pop's best buddy" and she is.  Funny enough, she is the one most like me.  They have the best time together and I love to see her little face light up when she talks to him.


My dad and his first best buddy! My daughter and the oldest of the 11 grandchildren. 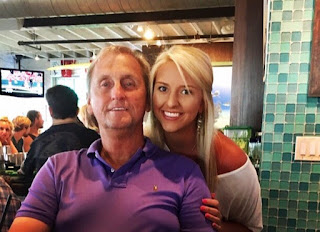