Who likes a good scary movie??!


I am thankful for scary movies. I absolutely love them! But, I am a scaredy cat. I will watch one then run to the bed after turning off the nights and not sleep for a week. After the creepiness and fear wear off I am thankful for sleep!

Scary movies have really evolved over the years.  The old ones are still the best. There weren't as many special effects so you had to use your imagination a little more and the acting was much better.  Old ones like Hush, Hush Sweet Charlotte and Whatever Happened to Baby Jane? are just classics. Then, there's The Changeling with George C. Scott that had a great twist.  A good twist at the end is underrated.

It seems that newer movies go more for the shock value and almost just get tired and end the movie and it doesn't always make sense. My kids and I love Halloween.  When they were younger, but not too young, we would get scary movies and have a marathon on Saturdays. Everybody has things going on now so it's hard to find a time for all of us to even go to a movie together so we don't get marathon days anymore.

I am my aunt Gina's clone.  She is my dad's younger sister and we are so much alike. She loves scary movies too. I think I have my love of movies and music because of her.  She was 14 when I was born and she spent a lot of time with me when she was in high school so naturally I looked up to her and loved whatever she was into.

We have watched countless movies together.  My dad likes them, but doesn't like to admit he gets scared.  When I was little, I remember the commercial about When a Stranger Calls. At the end, it would ask if you have checked on the kids.  My mom told his whole family he got up and checked on me, my brother and sister late one night after hearing the commercial.  The house we lived in at the time had all of our bedrooms upstairs.  If anybody got up or sick you could usually hear.

My dad has always tried to keep us from taking things to seriously.  He always says famous people are like us and pee first thing in the morning. He would always try to explain the scary movies.  He and I were always night owls and I think I enjoyed those marathons with my kids because my dad and I would stay up late on Friday nights and watch The Twilight Zone and Outer Limits.  He would always cook us up something and it was just fun.

One night he decided to keep me from being scared after watching something. I went to the bathroom and came back to the den with him laid out on the recliner with ketchup all over his neck. He was trying to show me how they do it in the movies and TV, but it scared me to death!

He had good intentions, but I don't think I ate ketchup for a week!

I always dressed up for Halloween when the kids were younger. This was my best costume. I had the candy on a platter around a severed head.  We lived in a subdivision where we gave away insane amounts of candy....except that year.....I had plenty left over! 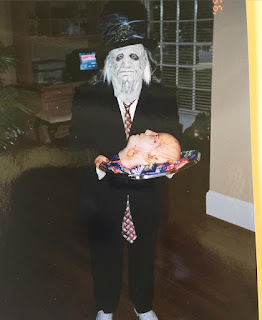