Last Thursday morning, I woke up and went towards the kitchen for coffee when I see my daughter standing in the den and my son beside her with a golf club.

We have a poop pad our two little dogs use in the corner of the den and they were both looking over it. It scared me, I thought there was something wrong with one of the dogs. The pad is between the couch and a big bookcase and entertainment center that was built with the house.

My daughter looks at me, obviously shaken, and said, "I just saw a baby snake go under the bookcase."

I HATE SNAKES! There is no good kind, even dead.  I don't like them.  I feel like going into the rhyme of Green Eggs and Ham because "I do not like them here or there, I do not like them anywhere."  BUT, I particularly DO NOT like them HERE! I freak. I am terrified of snakes and clowns. Seriously. I am absolutely scared, frightened out of my mind of both.

I have always said if I ever got one in my home I would move.  I didn't know what kind they saw and of course, I immediately go into the thought of there must be a mama and mama snakes don't have just one baby. Fortunately, our exterminator is a friend. His dad started the business and they are the only people we have ever used. He knows how scared I get so he came right over. I call my mom and she's freaking out because she lives next door and she's gone right into, "I bet he puts you with, Jason, the wildlife guy."

I would have been out of there, but I can't leave my dogs. There aren't many places to stay with them and I have to find out what kind of snake this is and how it got in.

After a few minutes of questions, the exterminator tells us he isn't fond of them either.  He sees a hole between the carpet and bookcase and says the only thing to do is take off part of the case and look. I say, "what are you waiting on."

He tears off the bottom, takes a look, and says, "The good news is I don't see a hole or any way it got in, but he's so little he's in a corner and I will have to tear up more to get to him.  He is just a ring neck snake so it isn't poisonous."

Tear the whole damn thing down.

I have to be rational.

The night before, me and the kids were in the kitchen and our older dog did a bark like she was hurt. The younger one has a bad knee and does this sometimes, but the older one never makes this noise. We looked and she was barking at the front door. There is a little bit of an opening at the front door at the bottom so I think she saw it come through and was scared. The lawn people had done our yards that day so they may have disrupted a family.

The exterminator leaves and now I have an open bookcase with a snake in it.  We put the boards up the best we can to try to keep it in.  Every time I walk by I get the chills and look to see if I see it.  That night, my younger son decides to sleep on the sofa.  He does that sometimes when his back hurts. The older dog, Mia, sat on the couch at his feet and every time I walked by she was staring at the bookcase.  She must have kept it in all night because the next morning we got glimpses of its head trying to poke out every few minutes.

I am really good at the game whack a mole, but don't want to hit it (we have had the golf club propped up by the bookcase all this time) and not know if I killed it or just stunned it.

Now, I have put my kids first their whole lives. They have never been neglected and always taken care of. These three ungrateful people left me there by myself with that thing. I didn't know what to do.  I didn't want to sit there and watch until they all got home in hours. I thought I would make it harder to get out or at least confuse it. I lined up everything I could to try to cover every crack and my den ended up looking like this: 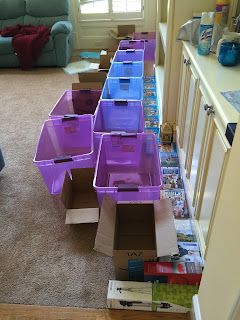 I hated to use my children's Bible books, but they fit perfectly, both literally and figuratively!


Well, I kept looking to see if I had trapped it anywhere and finally, it was out and at the edge of the den.  I had only one thing I could do. I hit it with the golf club and threw it outside.

"Well, what would you do?" (In Howie Mandel's Bobby voice.) 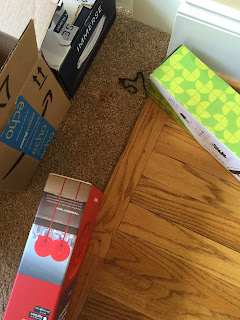 Before anyone gets upset with me, the exterminator was trying to get it and take it out. If my kids had been there, we could have tried to get it out alive but I knew if it got loose we wouldn't be able to find it and my dogs were acting so funny and had completely said "Hell-NO" to using the poop pad where it was.

I was kind of proud of myself that I took care of it.  I also think my mess helped it come on out rather than trying to come out to an open space.

My dogs said thank you with their eyes and I had not walked back in from throwing it outside a minute before one of the dogs ran over to the poop pad after holding it in. I called my younger son and told him to go get some of the spray foam so I could plug the hole in the bottom of the front door.

We can't open that door at all now, but that's ok. We have two more doors that work fine.

Has this ever happened to you?