We got our sweet, little dogs groomed yesterday. I always wanted pets growing up, but I had terrible allergies and went through allergy shots for years at the pediatrician.

My daughter had begged me for years to have a dog.  All of her friends had at least one and she wanted one. I told her for years it was me or a dog, I couldn't live in the house with one and when she would take too long to answer I always changed the subject. My niece had also been at my sister to get one.

My sister's kids have the allergy issues too so she found out about a breed of maltipoos that are hypo allergenic. My daughter, Sydney, went with my sister's family to a breeder to look at puppies of this kind three years ago. They thought it would satisfy them, but then they really wanted one. I decided to take them back to just look again.

I saw my daughter and my niece with them.  They had picked just the one they wanted. This niece, Skylar, is my oldest niece and she is my namesake (her middle name is April) and I am her godmother. There's a very special relationship there and I took one look at these two special girls with their picks and before I knew what I had done I put down a deposit and was bringing them back the next day to get their new friends.

Our new family member was Mia. She was the runt of the litter and had, well still does, anxiety. She would shake and throw up and get nervous over anything. I have had some health issues and back surgeries so I have been working from home and always with her. This dog that was supposed to be my daughter's was soon sitting with me during the day and sleeping by my bed at night.  Eventually, she ended up sleeping next to me.

When we would leave just to go to dinner or run errands, she would start shaking when she saw me put on my shoes. I didn't leave her overnight, just for a little bit at the time, but she knew when I was not just walking outside for a minute. We decided to go back to the same place a year and 1/2 ago and get another dog so she wouldn't be lonely when we left and we thought it would help with her anxiety. Mia being so little, we wanted a dog that wouldn't get bigger than her so we got a maltipoo teacup. This teacup dog fit in the palm of my hand. She quickly grew and now has Mia by a pound.


This is not long after we got Maggie and she was still so little. 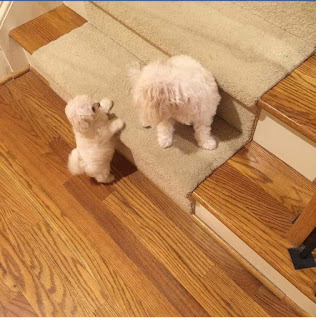 It has worked out great, though. They are so close and are just so much fun. I got Maggie so I could leave Mia, but now I don't want to leave either of them and they both sleep with me!

They just sit together all day. This was about a year ago after we had Maggie fixed. Poor thing. They both hate bows. They work and work to get them out. They were groomed right before having her fixed and with the inflatable ring Maggie was stuck with hers. 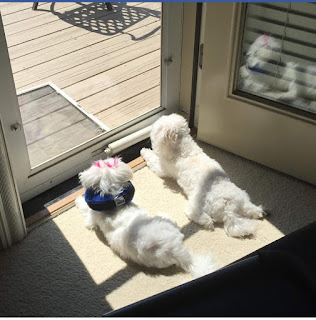 Being divorced and my kids older and gone all the time, they are just the best company. They follow me everywhere and know when I don't feel well. The kids call the dogs my favorite kids, but I told them it's simple, they don't talk back!

They are the best little security guards, they hear everything.  I had a lumbar fusion last year and this is a picture I took of them. They wouldn't let me get up without them going everywhere with me. Mia is the one closest to my chair.  She would leave that little leg hanging off ready to jump up if I even thought about getting up! 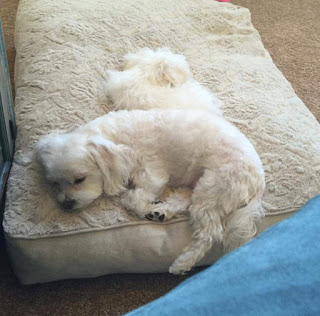 I just love these little girls!