What did you and friends hide from your parents?

As I am typing this, a Friends rerun is on. I think anyone who knows me knows how important family is to me, but you can't underestimate true friendship. My kids don't see their dad or whole side of that family. My side has always been there for them, but God has placed people along the way who have been so good to them and have shown them loyalty and friendship in so many ways. It's nice when people are "there for you" when they aren't obligated or don't have to be.

For my Thankful Thursday #2, I am thankful for friends, especially those of my kids. They all three have very special people around them. My youngest who just graduated was blessed with some really great guys in his class he has been friends with for years. He's friends with their whole families.

I guess I didn't realize, being a girl, just what boys get into. My older son played football in high school.  He was a three year starter and his team won state all three years! Needless to say, he didn't have much time to get into shenanigans. By the weekend, he was too tired and sore to do anything.

My younger son has a whole different personality. He likes to be a little more daring and God knew what He was doing making him my third because if he had been first I might have been fearful of having anymore.

I don't know if I will ever know what all he and his friends have done, but I have gotten hints along the way.  His best friend played football and left a couple of weeks ago to go to college on his scholarship playing football. These two guys are like brothers.

They have been trying to fit things in and seeing what all they could do from January until the end of school knowing they wouldn't have all summer. Oh, and my son has a steady girlfriend since December and it has cut into their time. I absolutely love her, though, and she keeps him from being such a daredevil.

My son, Stratton, and his friend left early on a Saturday a few months ago and went to the zoo and were gone all day. I really didn't think much of it, they were a little quiet when they got back but dumb me thought maybe they were just tired.  My boys' rooms are upstairs and I don't go up there often because of my back and well, they are boys, and it can be gross and I just don't want to know.

About a week and a half later, Stratton says he needs to tell me something.  I will be honest, sometimes I ask how important it really is that I absolutely have to know. These two guys ditched the zoo that day and found a pet store and bought a bearded dragon lizard. I love my little fur babies, but I do not like any reptiles. ( is it amphibians?) I don't like anything with a long tail.  My doggies have pretty little white tails that look like flowy, feather pens. Until they get too matted and the groomer has to shave it, THEN, they can look a little rat-like. But, their faces are so cute.

This "thing" had been in my house for over a week without me knowing.  They had joint custody and were sharing time with it.  Whoever sold them this thing told these two fools it can learn to smile and come to you. ????? When he said that I told him I wasn't sure if he needed a car, not for punishment, but that if he believed that I wasn't sure he had enough sense to drive one.


Finding out he had it didn't compare to finding out it had been in my house without me knowing. Just when I thought I had gotten used to the idea I hear the lady who helps me clean scream. I didn't know it was "our week" and forgot to warn her.

Oh, and then there's the name that only two 18 year old boys could come up with. I will just say it's short for Richard.  I finally told all of my family in case they came over unannounced.

You can't even begin to make up the humor and questions my grandmother (Nana) had asking about, uhmmm, Richard.  I don't think she asked Stratton a single question without adding his pet's name. It was fun, though, seeing my mom and uncle get so tickled when Nana asked so very seriously and attentively, "How big is (Richard)?"

And, NO, she didn't say Richard!

He's on top of the rock. The sweet lady who helps me only saw the tail and thought he was a snake. 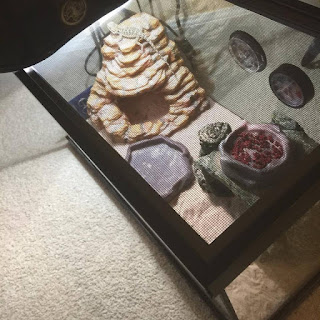