I have a really great, smart, sweet, and fun friend who is not only a great mom and grandmother, but she is an educator also. She has years of experience as a principal and was even assistant superintendent of our city schools. She's simply amazing. Her personality fills the room. I babysat her kids and her brother's kids when I was in high school. Our families have been friends for years and her father delivered me, my sister, and brother. I cannot say how much I love this whole family.

Her being her, during her battle with very aggressive ovarian cancer and a relapse, she had so many wonderful words of wisdom, but one phrase stayed with me. "There's always something to be thankful for."  No matter how dark your day is, there is one blessing no matter how hard you may have to look for it. (She is doing well after a very intense battle.)

I am calling this Thankful Thursday because I am thankful for so many things. Most of them, I have no control over. Being a parent has never been easy. From the earliest of generations, they have had obstacles and concerns. At the time, they are crucial. In hindsight, they seem a little less dramatic.

When my kids were little, childproofing was a big thing. I say "big thing" because earlier generations didn't have these handy little things to keep their children (and themselves) out of doors, drawers, and electric outlets. I was scared to death at least one of my chidlren would stick a fork in an outlet I overlooked or had forgotten to replace the plastic insert (that I needed a fork or other sharp object to pull it off). I probably should have wondered why they might have had a fork in the first place.

This brings me to Thankful Thursday #1:

Cellphones and not having to decide if my young kids should have them.


We had flip phones and pagers and earlier relics of mobile phones (some were also walkie talkies which were fun), but the thought of wondering if my kids needed one never entered my mind. There was no social media, no phones at the table, no texting.  My kids are in college, not 90.  This wasn't that many years ago. By the time they were in high school I had to think about it, but not before.

My grandparents are 80 and 85. They are on Facebook and have a cell phone and even text. I am not saying they know how to use it all correctly, but they have it. My grandmother butt dialed me one day and I still have the message on voicemail. Evidently, they couldn't find their car and she's who I inherited my back issues from (I have had 4 surgeries and two fusions) and she was tired of walking. I think I also inherited from her adding in cuss words when I have been walking a long distance and really need to sit down. I don't know, the bad words seem to take the sting out of each step. I could hear her saying, "I don't know, shit, maybe over there, shit, no it isn't, well shit." I don't know how well they were communicating with each other because my grandfather has selective hearing. He selects when and when not to have his hearing aid on. What I was getting to was they are amazed at technology. No other generation has seen such strides in such a short time. I also inherited her ability to go off on a tangent while trying to make a point.

I am so thankful I didn't have to make the decisions about phones my sister and brother are having to make. The older kids do have them, but mainly for communication and safety. My brother's oldest is Type 1 diabetic so they have to have communication at all times with him. There are just so many safety issues that parents don't know what is the right decision.

Cyberbullying really makes me mad. It was bad enough, but now kids can bully and not even have to do it face to face. There are predators just looking to connect with young kids. There are a lot of factors and I think parents have a really hard time with this one. I believe it depends on each individual child when they are ready or might need one.

My sweet grandparents. My Papa and Sydney share the same birthday. Her first birthday he wrote in the card that she was the best birthday gift he had ever gotten! 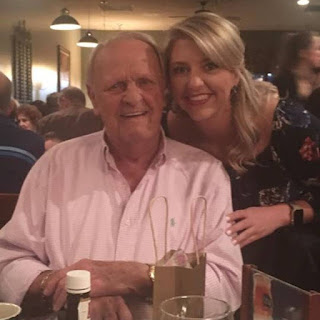 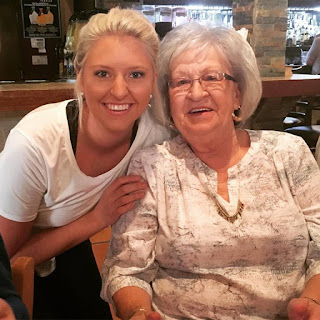