Land of the Free Because of the Brave

I have always felt weird saying "Happy" before "Memorial."

My son Shane's birthday is tomorrow (he's turning 22!) so we have usually had a birthday party on or around Memorial Day.

We celebrate today because of those who fought for our country and who have died. I just can't imagine the worry parents and loved ones have when someone they cherish signs up for the military.  I know there is a feeling of pride too, but I am sure fear is the top of the list.

We know life is a blink and things happen to people all of the time, but someone choosing to protect our country and sacrifice his/her own life to do so is just the most selfless act there is.  It indeed is a type of calling.  There have always been wars and men/women fighting in wars.

Aretha Franklin said it best, but respect is such a big thing.  I really think that is what is lacking in so many relationships and the general reason people don't get along.  If you have sincere respect for someone, then even if you disagree on a matter you aren't going to do anything to mistreat that person.

I am the last person to give marital advice since I am divorced, but if you truly respect your partner you aren't going to hurt them on purpose.  Respect is such a basic thing, but means so much.

I saw on the news this morning there was a softball game being played somewhere and the national anthem wasn't going to be sung before so the fans took it upon themselves to sing it.

I found this poem on Pinterest.  I couldn't find who wrote it.  If you know, please comment. 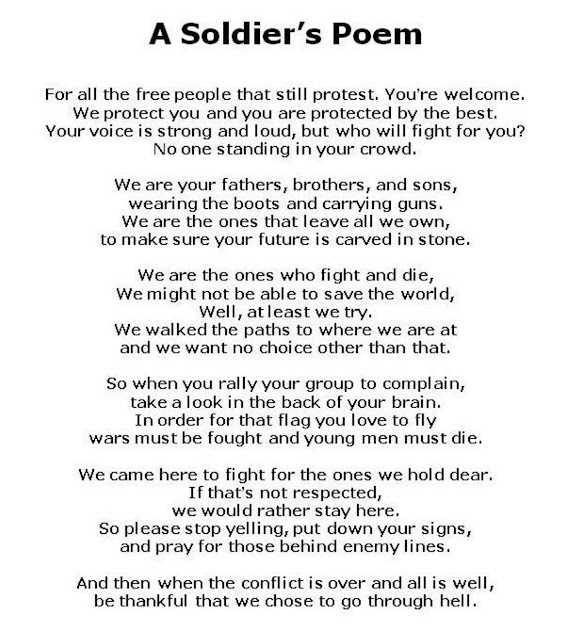 The weather isn't being very cooperative here. I don't think it is in many places.  Gosh, bless the poor people in Maryland who just recovered from flash flooding in their pretty little town two years ago only to have it all washed away again. Alberto isn't showing mercy on anywhere in its path.  A lot of places aren't having the celebrations they normally do because of weather.  I think sometimes we get so into celebrations we tend to lose sight what it is we are celebrating.  Maybe this is a time for reflection and realizing just what the day means.

I hope everyone has a blessed day, I just still feel strange saying Happy in front of Memorial.  I was at a funeral home one time and when I left a guy working there held the door for me and actually said, "Come back soon." I had to have given him a look.  That is the only business you shouldn't say that. I still wonder what in the world the guy was thinking. Maybe it was just business to him.  I think a little reflection and deep thought in this case would be helpful.

I made these bracelets for us, but I am going to make some more and have in my Etsy shop.  They would be perfect for the 4th of July!  I have a new charm coming the end of the week and another in a couple of weeks that is also red, white, and blue with a great message for the 4th also! 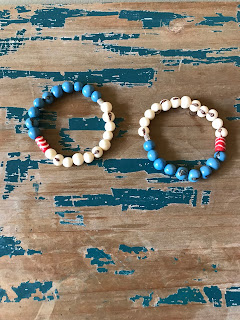 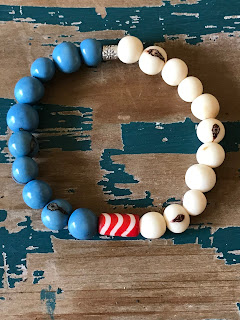