I am thankful for this man, plain and simple. 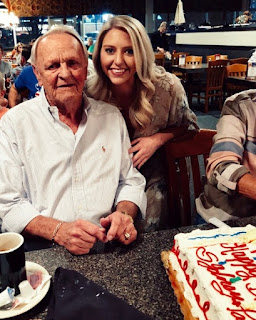 This picture was taken Sunday night.  My grandfather, Stanley (Papa) and my daughter, Sydney, share their birthday.  This was their 24th birthday together.  Y'all know how bad I am at math, but I think they have technically shared 25. He was there the night she was born.  He was also there two days before she was born.  I had gestational diabetes with all three of my kids and my due date was the 17th.  I went in on the 16th for my weekly check up and they admitted me because they won't let gestational diabetic moms go past their due date.  The placenta ages faster.

My grandmother was so upset that they put me in then, thinking if they induced on the 17th she would be born then, well, maybe for most moms that would happen and miss having the same birthday as my grandfather.  But, leave it to my weird body.  I ended up having a C-section on Friday night, the 18th.

It is such a sweet thing that they share their day.  It is a very special relationship with grandparents and grandchildren.  I think it is even exceptionally sweet between a grandfather and granddaughter.

I am so thankful for my Papa and so many sweet memories.  When I was sick when I was little, he could comfort me like no other.  He was in the Navy and worked with the ship doctor, so he is the one our family goes to with health questions.  He turned 86 this weekend, but if he had been born later when men went into nursing, he would have made a heck of a nurse.  He would have been a great doctor, but his compassion and sweetness would have made a great caretaker.

I have countless memories with him, but one sticks out.  Right after I graduated from high school we went on a trip to Fort Myers.  My Nana and Papa had been going there in the winter and wanted my mom and dad and me and my brother and sister to look at places so they could rent a house for us to go with them between Christmas and the New Year.  While we were in Fort Myers, we went to the dog tracks.

I love the dog tracks.  We went all the time when we spent summers in Daytona.  You use to have to be 18 to get in.  I remember one year, I was 16, and my mom and dad wanted me to get in.  My mom gave me her wedding ring to put on.  I walked in with her, my dad, and my boyfriend.  I don't know why being married made me 18, but it worked! They didn't even check me. I got in and the first bet I placed were my birthday numbers and I won $300.

I was 18 that summer in Fort Myers.  We went the first night and I bet all night with my Nana and Papa.  We marked the winners in our book.  We knew we were going back the next night so we got the book for the next night when we left.  My Papa showed me how to read it and we studied that book the whole day before going back that night.  We looked at the kennels, the size of the dogs, and this was the most important, their position.  We saw in previous races what dogs were better on the outside, or on the inside.  Then, we looked at their position for that night.  I don't know if we cracked a code or were just lucky, but we won almost every race that night!

Papa loves the outdoors.  He used to always have a big garden and can grow the sweetest tomatoes!  Bless him, he would come over almost every Spring when the kids were little and plant us a garden.  I did not inherit his green thumb.  I never could grow the garden.  It might have not helped that I had three kids within 5 years and was busy with them!  Even after they got older, I tried, but still couldn't grow anything.

He loves the beach and ocean.  It's funny too because he has a tattoo from when he was in the Navy.  It has "Mom," "Dad," and "Helen" (my grandmother's name, yes, they are like the Ropers from Three's Company!)  I love seeing all of our kids' reactions the first time they see it.  It's usually in the summer in my mom's pool.

He's comforting when you are sick, but he's also good with a broken heart.  When my other grandfather passed away 8 years ago, he and my Nana came and sat with my kids while I was at visitation.  He was showing my boys, then 11 and 13, how to play cards.  He started calling my older one Shi Theed.  His name is Shane so he thought he was just playing around.  It took a while and my 11 year old to figure out he was really calling him Shithead, he was just pronouncing it differently!  My kids were so close to my other grandfather and Shane went to visitation and had gotten so upset.  Papa knew how to at least get him to laugh.

Both of my grandfathers went to the same high school.  They both played football.  It was always so special that my grandfather got to see his great grandson play for the same high school football team.  He didn't miss a game and even watched some of the practices.  Shane was a three year starter and his team won state all three years.  We got to go to the Dome in Atlanta and Papa always had a special sparkle in his eyes watching Shane play.


This was after one of Shane's senior games.  It was a home game on the field named after my Papa's coach.  It isn't easy getting down on the field after the game, but my uncle was there and we got Papa on the field so we could get a picture. This was at the Dome after winning state for three years in a row!!!!!  I love this picture with my mom and dad also in it.  Dad battled Hodgkins Lymphoma twice and had a stem cell transplant while Shane was in high school so he missed a few games, but he made sure he was there that day! 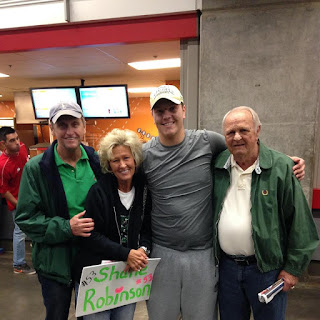 My Papa is one of the sweetest, honest, and fun to be around people I know.  I don't know anyone who doesn't like him.  We are in a small town, I would know if someone doesn't! I am so blessed to have him in my life and my kids and nieces and nephews are even more blessed to have him as their "great" grandfather.


In honor of my sweet, proudly Christian grandfather, I made these two bracelets.  The inspiration for the green is our school colors and the blue in the beads in the second bracelet are for his "baby blue" eyes.  He has the sweetest look out of his eyes. 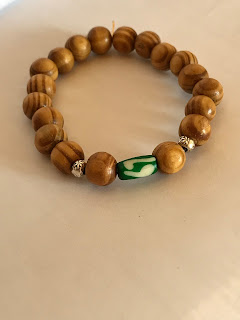 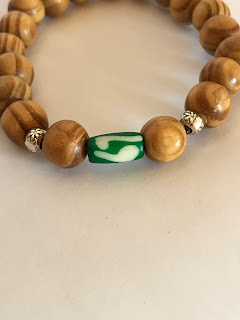 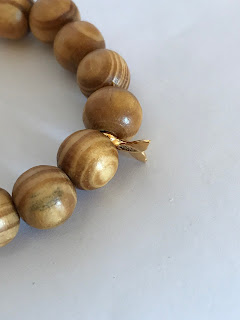 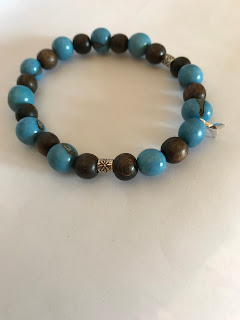 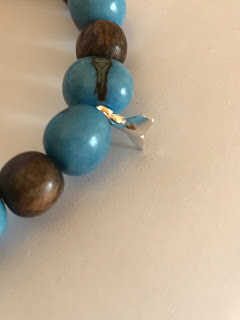 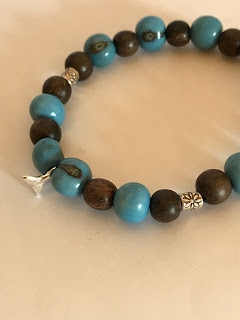 I just got in the beads for these two bracelets.  I have more acai beads and bone beads and I am SO excited about the beach charms I just got!  I have flowers, but the whales tails and stingrays are just too cute!  I am going to be adding these to my Etsy shop and others with the new materials.  If you see something you like contact me on Etsy or at sweetteaandsistersjewelry@gmail.com and I can custom make you a piece just for you.  Here's a look at my new materials! 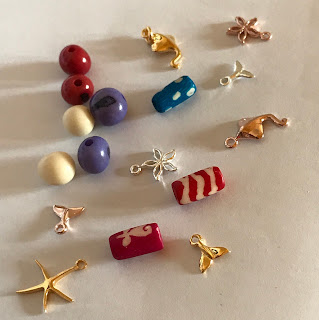