There was a movie, Staurday the 14th,  when I was younger joking about what happens on the day after Friday the 13th.

I think everyone has a little bit of superstition in them. I know I do.  I don't like it, though.  I have such a strong faith and know there is no such thing as good and bad luck, but I fall into certain things almost as a habit.

I have my own quirks.  My dad has always had them.  His grandfather did too and he spent a lot of time with him and picked up some of them.  My dad is like me, he doesn't like it and tries not to give in to them, but sometimes we do things without thinking.

It's funny, though, that 13 happens to be my lucky number.  It's a long story, but I was in my high school beauty pageant and we drew numbers.  I was in the 9th grade and drew #13.  My really good friend was in 11th grade and sitting next to me.  She knew I didn't want that number and she swapped with me.  Neither of us did anything that year, but the next year, her senior year, she won the pageant.  The following year, my 11th grade year, I drew #13 again.  This time I decided to keep it.  Well, I won the pageant that year and my good friend who swapped with me before crowned me.  We were really good friends and I ended up being in her wedding a couple of years later.  My sister won the pageant three years later and my daughter won in 2012.  It is a big deal in our "little town."

My friend to the left as reigning queen the night I won and me to the right in white. 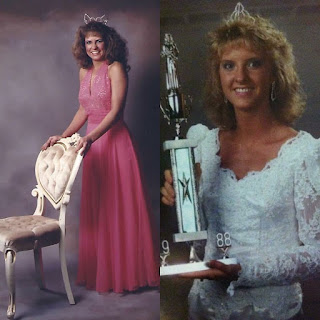 My sister the year she won. 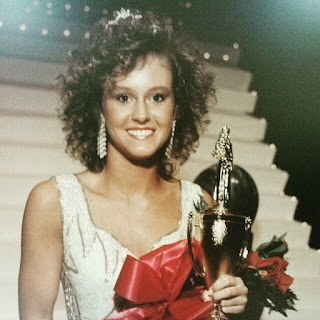 My daughter in 2012.  The pageant had changed into a scholarship pageant over the years and involved a lot of service hours which she loved.  It definitely impacted her and why she went on to get a degree in psychology.  She graduates college next month! 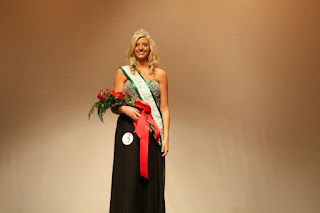 
Some superstitions came about because people couldn't find explanations.  Black cats are associated with witches, spilling salt is bad luck.  Salt was a precious commodity in ancient societies and spilling it was a wasteful and careless act.  It was believed the devil stood behind the left shoulder waiting for a way in and spilling the salt was a kind of invitation.  Throwing the salt would go into the devil's eyes blinding him and taking away his power.  Not walking under a ladder and breaking a mirror are also more common superstitions.

I find the origin of some superstitions that have to do with brides very disturbing!  A fun part of a wedding reception is when the groom tosses the bride's garter.  This comes from ancient times when bridal gowns were considered blessed.  By the end of the night, a bride would have her clothes ripped from her by guests as they were all trying to get a piece of the blessed garments.  In medieval times, if an unmarried man got the garter it was believed it would ensure they would be next to find a beautiful and fertile wife.  This would lead to  the bride being mobbed as she stood at the altar!  With the church protesting, the tradition became the groom removing the garter and tossing it from a window to men below.

Wedding cakes in Roman times were made of nuts, wheat, fruit, and honey which were symbols of wealth and fertility.  The rather violent custom consisted of the cake being broken over the bride's head to ensure a fertile and prosperous future and the guests would all fight to pick up the crumbs for good luck. In keeping with this today, everyone has a piece of cake and even pieces are taken home to those who weren't able to be there.

There are also some crazy, more uncommon ones.  I remember my grandfather giving me a set of knives one time, but made me give him a penny for them. Giving someone something with a blade like knives or scissors can  possibly sever a relationship so you give a coin in return.  Unless you don't like someone, then maybe I have just given you a great gift idea for them!

Don't go home after a funeral.  It might result in a spirit following you home.  In Lithuania, it is forbidden to whistle indoors because it is believed to summon demons.  A German superstition comes from Greek believing if you cheers with water you are wishing death upon the people you are drinking with.  Ok, I don't want credit for that one if you use it! Haha!  A Japanese superstition is to avoid sleeping with your head to the North because that is the way the dead are laid to rest.  It is the same in Africa for the same reason, but avoiding laying your head to the west.

In Britain, it's bad luck to put your shoes on the table.  Years ago, placing someone's shoes on a table was a way of letting their family know they had passed on.  Today, it is just gross and bad manners.

According to an Italian superstition if an owl ends up in your house, it means a family death.  My family has always heard this, but about birds in general getting in the house.  I used to live in a house down the street before we moved into my brother's house a couple of years ago.  For about 4 years in a row in the old house during Spring, I had mourning doves build a nest and I don't know if it was the same mama and daddy bird, but we would get three rounds of babies.  It was fun to watch.  They had their nest on a covered porch and my dad said that might still be considered part of the house but I had to let them do what they were supposed to.

And, I don't know if we need to be mad at all of you knitters, but an Iceland belief is if you knit outside the house it will prolong Winter and keep the frigid temps.  Ok, I am not sure about this one.  We are talking about ICELAND and how many people do anything outside there??!!!

It is really eerie if Friday the 13th happens around Halloween.  I love Halloween anyway.  This year the good thing about having the 13th of April on a Friday means that the 15th falls on a Sunday giving extra time for taxes.  That's good luck however you look at it!

Thinking about superstitions, I refreshed my Sugar Skull earrings in my shop.  I had them listed before Halloween, but with Cinco de Mayo coming up they would be perfect!  I added one more pair to the listing. 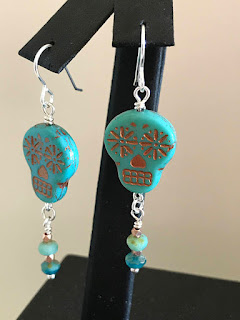 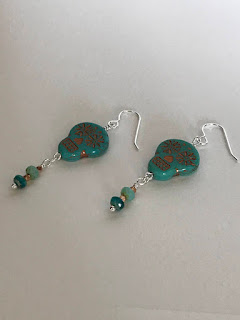 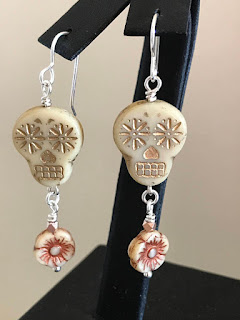 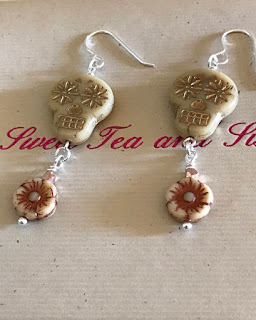 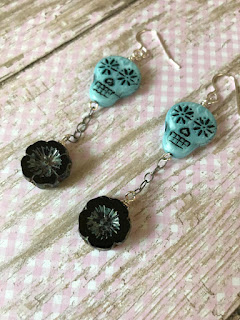 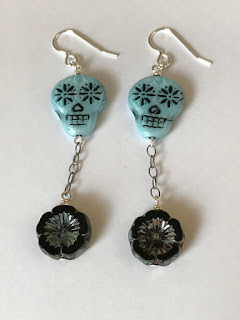