Are you a Nascar fan?

My son got to do the Nascar Racing Experience yesterday.  His sweet girlfriend gave it to him as a gift.  He had been looking so forward to it!  It was supposed to be on Saturday, but it was cancelled because of rain and yesterday was so cold.  It was an unusually cold day for here.  It was in the 40s and the wind made it just hurt.  BUT, it was so much fun watching him be so excited and watching her watching him enjoy it.  They are the sweetest couple.  They are so considerate of one another and you can easily see how much they love one another.

I don't watch Nascar very often.  I think all boys love cars.  I remember my brother having his collection of Hot Wheels.  My grandparents and my uncle Jimmy are very big fans.  My daughter and my grandfather share their birthday and it is February 18th.  I remember we were out to dinner for their birthdays that year and the race had been on and that's when Dale Earnhardt passed away.  That was such a sad day for so many.

They have a class before you get to drive the car.  We were all able to sit in on it and I was nervous enough, but it was really scary when they told them what to do if they wrecked or if the car caught on fire.  It was a lot of information!  I said I would have needed to listen to it a few times to get all of it.

Oh, and I didn't know the steering wheel comes off.  They told them to pull on it really good to make sure it is on right!  I looked at my daughter a couple of times when they said really scary things.  Stratton even looked at me a couple of times!  His girlfriend, Courtney, got concerned after listening to everything.  She told him he didn't have to do it, but he was so excited, there's no way he was going to back out.

The thing I thought was most interesting was that he had someone talking to him over headset the whole time.  The guy teaching the class told them not to look around or worry about anything but what is ahead.  There aren't rear view mirrors in the cars.

It was such a neat thing to me, hearing this, because it is such a lesson for everyday life.  We all are in our own "lane" and we shouldn't worry what everyone else is doing. We can't see everything and don't know everyone else's intentions or their experiences and where they are coming from.  All we can do is look ahead and listen to the voice in the headset who gives us all we need.  God is that voice and if we listen to Him, He will get us where we are ultimately going, safely.  He sees all so we don't have to. 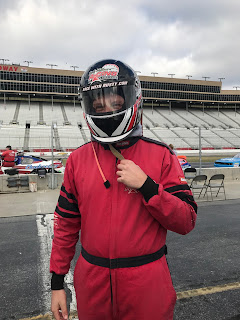 It was a really fun day and an experience that doesn't come along everyday.  The sweetest part was hearing Courtney in the video when he drove off.  We all need those moments when we realize just how precious people are to us.  They are just so cute and our families get along so well.

Courtney's dad and sister were there too.  Having two girls, her dad, Jay, enjoys a guy being around and doing things like this.  He teases Stratton and Stratton teases back, but they are really close and really care about one another.  Not having a dad around, my kids appreciate men who are good to them.